Tessa and Al asked us to Paddy’s Whiskers to provide a full day’s musical entertainment at their wedding celebration at the beautiful Barn, South Milton back in July of this year…acoustic music for the drinks celebration, a rip roaring ceilidh and then a disco late into the night.

They sent us some lovely feedback:

“We loved having you at our wedding and thoroughly enjoyed the music as did our guests. We got numerous compliments regarding you guys and contributed to what we felt was a perfect day all round.”

Thank you to Becky and Pat for asking us to play a barn dance at The Humber Barn, Red Rocks Brewery, Devon a couple of weeks ago.

Becky had been at one of our parties at the same venue a couple of years ago and decided to invite us to play for a joint party to celebrate her birthday and that of her good friend Pat.

We had a lovely evening..the views from Humber Barn are amazing and the crowd were totally up for dancing…it was wild!!

Some lovely feedback from Becky:

“Hi Andrew, thank you too for playing such great music and keeping everyone up dancing! I think everyone thoroughly enjoyed it (we certainly did) we had loads of compliments about the band and how well organised the dancing was.

We’ll have to find an excuse for another party, I don’t want to wait another 10 years!”

Andrew, Jules and Blake (from Paddy’s Whiskers) together with long term friend and musical collaborator Sorrel, were lucky enough to be invited to play a ceilidh for an amazing group of people in the mountains of Southern Spain on Boxing Day 2017….we had a great team of callers for the day – thanks to Bates, Lesley, and Huw…..We’ll be back in the region soon so if you would like to book a ceilidh, barn dance or kicking band playing upbeat contemporary Irish, Celtic and American folk music – for your wedding, party, bar or festival – give us a ring on 0044 (0)7514064558 or email info@paddyswhiskers.co.uk 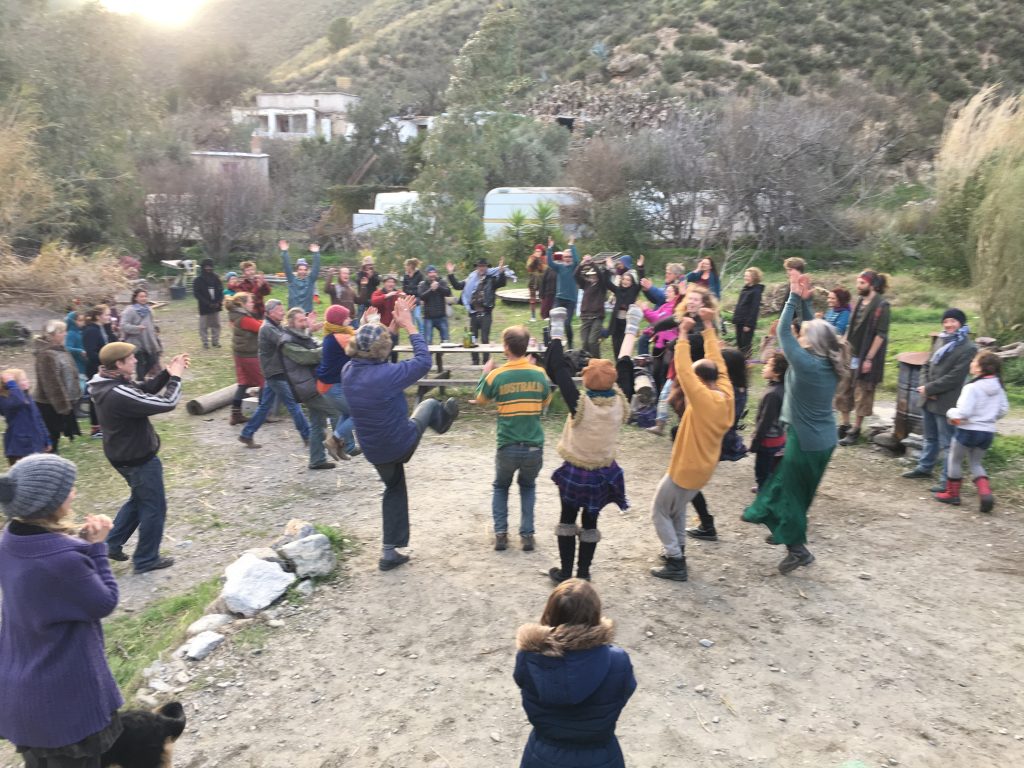 Earlier in September, Paddy’s Whiskers played a wedding ceilidh for Hollie and Matt at New Barton Barns in Wembury, Devon. Matt and Hollie booked our “duo plus caller” line up – a smaller band for a smaller space but with all the full on party energy that we bring to all our gigs.

Hollie sent us some lovely feedback:

“Matt and I would just like to say a big thank you for providing amazing entertainment on our wedding evening. Everyone said how much fun they had and how much they enjoyed the Ceilidh!

You are both such lovely people as well!

Paddy’s Whiskers are honoured to play many gigs, barn dances and ceilidhs at weddings, parties and private functions in Devon, Cornwall, Somerset and across the South West.

In the winter months, we take time off from private functions to write and rehearse new material, and to play a series of public gigs – when we can play our full range or Irish, American, Celtic and original material to our friends and fans.

Winter 2016/17 has been an exceptional time for us..starting with a long sold out New Year’s Eve party at The Boathouse, Paignton.

New Year’s Eve at The boathouse

What an awesome night we had – three hours of live music, bagpipes at midnight, a rocking crowd, Andrew from the Whiskers DJing,,, and a rebooking for NYE 2018…

Then in mid-January we were lucky enough to be asked to play a ceilidh for Kerry and James at Muddifords Court, Cullompton. Kerry and James had previously been to a couple of our public gigs, so it was great to meet them again. The venue was stunning:

The bride and groom:

and the party went long into the night, live music, barn dancing, DJ, surprises for the guests….

Then in February we played our annual winter warmer afternoon gig, back at The Boathouse. We love this gig as it gives us a chance to try out new material. The venue is close to our home, so all our friends come along…it was packed. Fun…and at these afternoon gigs, Blake (120 year old son of Andrew and Jules) gets to play a couple of numbers with the band.

And then..the madness that is St. Patrick’s Day. Always busy for Paddy’s Whiskers because we play and love Irish music..this year was the fifth in a row at The Snooty Fox, St. Marychurch, Torquay. What a day…what a night!

The morning kicked off with a live slot on BBC Radio Devon…at 7:15am!! And the reporter posted a live video of us playing a couple of jigs..you can see the film

We’d have dressed up if we knew he was gonna bring a camera! That’s our boy Blake on whistle.

And the Snooty Fox in the evening..a set long on Irish Tunes, well known songs (Dirty Old Town, Irish Rover, Wild Rover, Whiskey In The Jar) and fast and furious jigs and reels. Perhaps the busiest night ever at the pub…wild. Everybody dancing from 9pm til well past midnight. Guinness flowing..The picture at the top of this post is from the night.

Thank you everybody who made the night such a success. We’ll be back. March 17th 2018.

Andrew at The Snooty Fox March 2017

At the end of July, Paddy’s Whiskers were lucky enough to be asked to play a wedding ceilidh or barn dance for Andy and Naomi in a beautiful marquee in the picturesque village of Noss Mayo, Devon.

Andy was kind enough to email us with a few words for our website:

“Thank you so much for helping us celebrate our wedding in Noss Mayo, Devon on 30th July 2016. You were all incredible and made our special day end on such a high. Every song got people on their feet and the village was filled with the sound of Paddy’s Whiskers. Thanks!”

Thank you both so much – we rather like the idea of the village being filled with the sound of Paddy’s Whiskers! 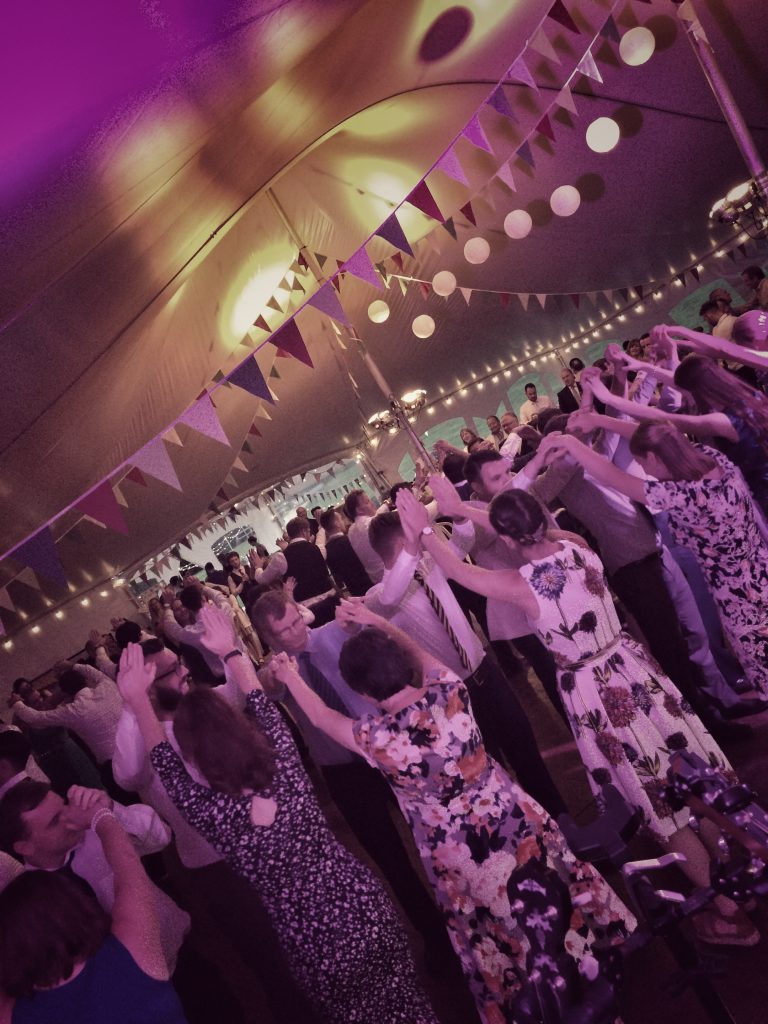 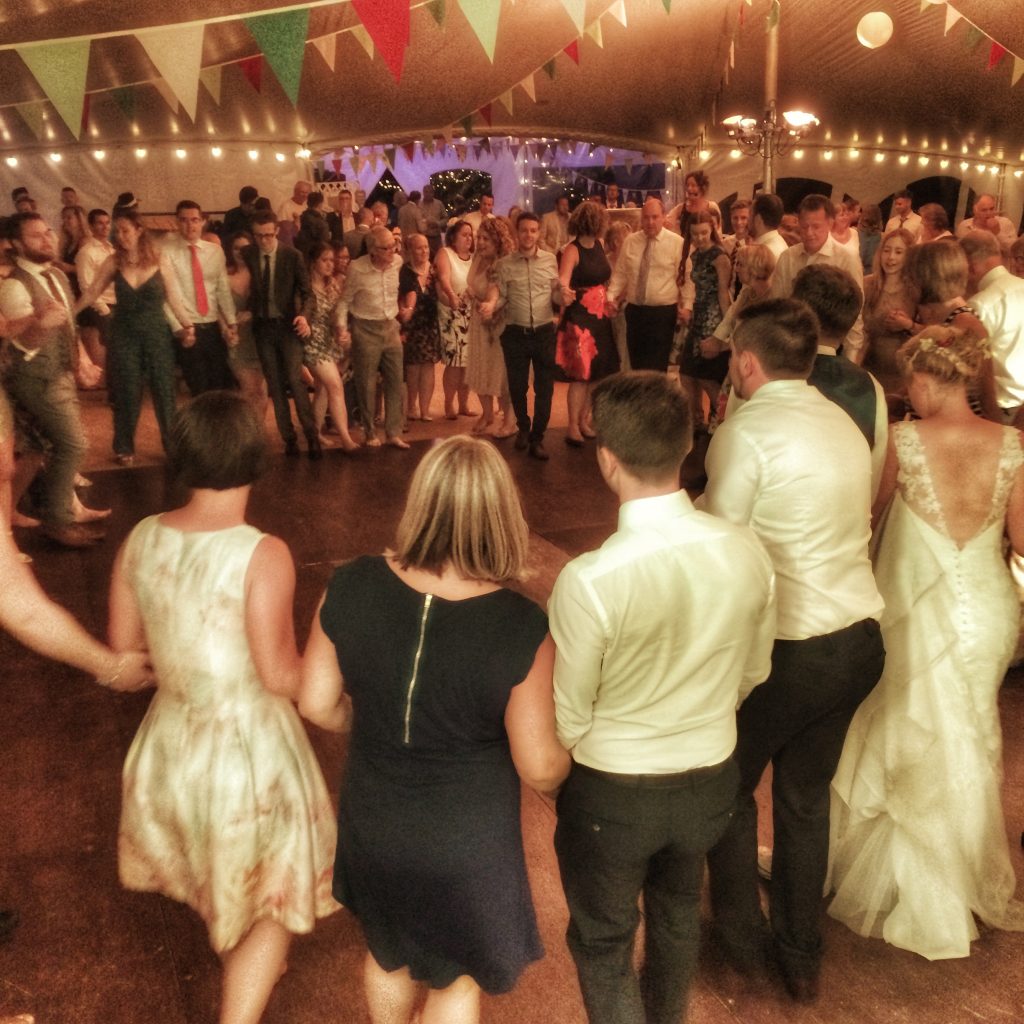 The Last Barn Dance of The Night

Lovely feed back from Emily and Trent – who played for at The Corn Barn, Cullompton back in November.

“We wanted to say a huge thank you for the best Ceilidh! We had such an amazing time and enjoyed it so much. It was great to see all of our friends and family up dancing

Thanks so much again and we will definitely be recommending you to any more of our friends who are having weddings in Devon,

Thank you both…it was an absolute pleasure!!

Back in December we played a birthday Ceilidh for Liz, up in Winkleigh, Devon. Liz had seen Paddy’s Whiskers play before and was kind enough to choose a date for her party when she was sure we could make it.

She sent us some lovely feedback after the gig:

“Hi Andrew and Julia and the band

Thank you so much for a fantastic time on Saturday. EVERYONE has said what a great band you are and not forgetting the energetic, patient and lovely caller.

We had a brilliant evening and everyone is aching except me, I’m just still smiling!

Once again many thanks.

Merry Christmas and may the New Year bring good things for you.

Set Up at Winkeligh, Devon

500 plus people dancing a beautiful sun lit evening away. It doesn’t get any better.

We’ve had some lovely feedback:

“You guys were awesome tonight at the barn dance, can’t wait to come see you guys in Paignton soon xx”

“Was the best giggle xx”

“What a wonderful night!A fab band. A great caller.And what a venue! Repeat please!!!!”

“That was a lovely evening! All those people dancing and laughing and enjoying the summer evening and the great music. Thanks guys!”

It’s busy season for Paddy’s Whiskers – we are now full booked until mid-October and the diary for 2016 is filling up.

The sun is shining, love is in the air, and we are enjoying making ceilidhs and barn dances for lovely couples across Devon, Cornwall and Somerset.

Paddy’s Whiskers are full time professional musicians – we are equally at home performing for concerts as we are playing barn dances or ceilidhs. When we are not gigging then we teach music – violin, banjo, mandolin, guitar and octave mandola.

When you book the Whiskers for your event, you can be sure that you’ll get a great party – we specialise in giving everybody a night to remember – and we are friendly, funky, efficient – we dress well and we look to make a cool contemporary vibe whilst playing footstomping traditional music.

If you’d like to catch us live we’ve a big public barn dance at Occombe Farm, Paignton on 4th July. Tickets are available from this link.

We’d love to see you!